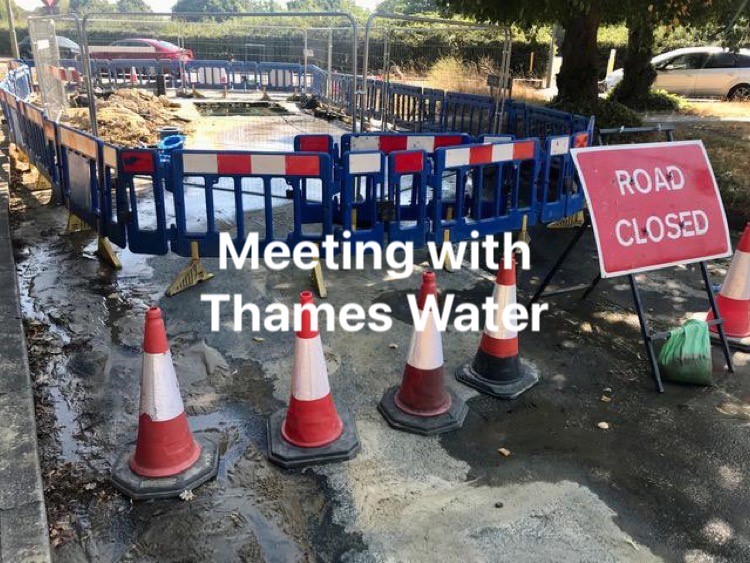 Chislehurst has been beset with a very significant number of water leaks, not just over the last few months, but also historically, often in the same place or close to previously repaired leaks.  Many of these leaks are on major thoroughfares such as the A222, Old Hill, Yester Road, Walden Road, White Horse Hill and, outside our ward, on Elmstead Lane.  Residents and commuters through Chislehurst have been becoming increasingly frustrated by the frequency; the inconvenience the repairs to the leaks cause; and the amount of water wasted whilst they are repaired whilst we remain in a hosepipe ban.

The purpose of the meeting was to meet the Thames Water (TW) Area Manager together with the LBB officers, who oversee the utility companies working on our roads and pavements, to get a better understanding from all sides as to the issues and explore solutions to improve the situation.

Whilst there is not going to be a seismic change overnight, the meeting was a very positive one indeed.  We are continuing to make the case for Chislehurst to be given greater priority for infrastructure investment and for leak repairs, where they occur, to be managed in a more time effective manner to reduce the time of disruption.

Communication channels between us and LBB officers are already excellent, and I wish to place on record our thanks to them for all they do to keep us informed and to hold TW to account.

We have now set up a direct communication channel between us and TW so that we can raise issues directly for (hopefully) speedy resolution and for TW to keep us updated for us to pass on to residents. We are optimistic that with an effective working relationship now in place, we will continue to see tangible improvements.

TW changes – TW has recently undergone a number of changes, including the appointment of a new Traffic Management company.  Some of these appear to us to be taking a while to bed in. They have come at exactly the same time as the hottest summer on record which has contributed towards the numerous bursts all over the large TW area.  There has been a need to prioritise which leaks are repaired first not just in Chislehurst but across the area.

Impact on residents/commuters – temporary traffic lights and road closures are not just a minor inconvenience to residents and commuters; they can have a real impact on their wellbeing.

Infrastructure investment – In September 2021[i], TW announced that there would be investment beginning in 2022 in upgrading hundreds of kilometres of water mains and relining or replacing the cast iron pipes, many of which date back more than 100 years to the Victorian era and are susceptible to corrosion and therefore leaks and bursts. What we do not know is if or when Chislehurst fits into those plans or whether we will continue to see fixes.  Both LBB and we have been trying to get this information from TW for some time to no avail.  We asked for TW’s area manager to assist us in this regard.

Planned works – where a leak has been identified, a plan is put in place for its repair.

Emergency works – these are unplanned works needing immediate attention.  They still require a permit from LBB which will be applied for often after works have started. Often the first we hear about these is when residents tell us of a major leak and/or lack of water in their homes so please report them on the TW website and also keep those reports to us coming so that we can assure they are dealt with as soon as possible.

Communication channels – I now have direct channels with the TW Area Manager to raise issues as and when they arise.  Where practicable, I will also be having weekly update sessions with him. Plans to visit their Head Office in Reading are also being made.

Effective repair management – One of the main complaints we receive is that a site has been set up but no one is working on it which adds to residents’ frustration.  Sometimes there are good reasons for this, sometimes not such.  If a repair needs water to be turned off, TW cannot do this if there are businesses, schools, residents etc nearby who are absolutely reliant on this.  It is for this reason, they will usually do this at night time hence, having set up the site there may be no one there until the night team arrive.  Similarly, there may be delays whilst waiting for parts to arrive.

However, we have all seen instances where the road is closed or traffic lights set up and no workmen are on site for many hours or even the next day, meaning another rush hour with huge congestion has to be endured.  Similarly, when the works have been completed but there is a long delay in the reinstatement and/or the traffic management (TM) remains in place long after the tarmac has set (eg Willow Grove).  Given the TM, repair teams and reinstatement teams are all separate workforces, it is inevitable there will be some delays between the job being sent out and attended to, but we made the case for this to be more effectively managed.  We encourage residents to continue to be our eyes and ears so that we can monitor this.

Traffic Management – there have been issues with traffic lights not being manually controlled during peak hours despite instructions from LBB eg Summer Hill.  TW are following up on this.  Additionally, there have been times when traffic lights have failed (again Summer Hill) causing chaos.  In these instances, residents often contact me and I, in turn LBB.  I am to be given the TM company 24-hour line so these can be reported direct to ensure it is dealt with at the earliest possible opportunity.

Elmstead Lane/Walden Road – works on Elmstead Lane (outside our ward) cause additional traffic or diversions onto Walden Road.  We asked for parking restrictions to be added to Walden Road in these instances to improve traffic flow.

Closure avoidance – unfortunately we have all seen instances where drivers ignore the road closures, move cones and barriers and drive up on pavements, even when pedestrians are using them.  We would urge all Chislehurst residents to respect the fact they are there in the first place.  They could be placing themselves and others at risk by ignoring them. (Some may recall the driver who ignored the closure sign in Yester Road a few years ago and ended up getting trapped down a sink hole! ) Similarly, please do not enter the site under any circumstances; there may be live wires or other dangers present. No more bathing in “Chislehurst Lido” please!

Site Clearance – we asked for sites to be left in good order when works are completed.  Ironically, TW cannot use pressure washers at present due to their own hosepipe ban, but they are deploying street sweepers.  We regularly see Fix My Street reports or see ourselves, barriers, cones, sandbags etc left on site and asked for more effective site clearance to be conducted.  Again, we shall be monitoring this.

Winter leaks – with winter coming, we are concerned about leaks causing danger should it freeze.  TW assured us there is a gritting service in these instances.